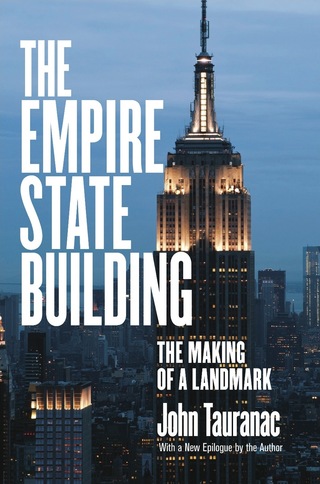 The Empire State Building: The Making of a Landmark

From the Cornell University Press web site:
The Empire State Building is the landmark book on one of the world’s most notable landmarks. Since its publication in 1995, John Tauranac’s book, focused on the inception and construction of the building, has stood as the most comprehensive account of the structure. Moreover, it is far more than a work in architectural history; Tauranac tells a larger story of the politics of urban development in and through the interwar years. In a new epilogue to the Cornell edition, Tauranac highlights the continuing resonance and influence of the Empire State Building in the rapidly changing post-9/11 cityscape.

Excerpts from reviews:
“Mr. Tauranac knows the architecture and buildings of New York as few do. He takes us through the story of the skyscraper as a form, the zoning that emerged to control the tall buildings, the real-estate boom of the 20’s, the history of the site, the careers of John J. Raskob and Al Smith and the architects and builders who designed and erected the building, and the building’s subsequent career.”

–Nathan Glazer, The New York Times Book Review
“The title of this book suggests that it is about an extraordinary building, but that suggestion is as modest as the promise of a bologna sandwich and decaf for lunch when, in fact, one will be served an eight-course meal with a bottle of 1949 Chateau Lafite.”
–Roger Starr, Book News (Citizens Housing and Planning Council of New York)
“This is a grand book about a grand building, but it is an even better book about New York City real estate and about the art of building skyscrapers. Indeed, it is probably the best general introduction to the city’s development process available.”
–Carter Horsley, Home Page of The City Review, http://www.Thecityreview.com/tauranac.htm
“John Tauranac’s Essential New York and marvelous Elegant New York were overtures to this masterpiece of architectural and city history. Like a great novel, The Empire State Building: The Making of a Landmark is a complex and fascinating tale of men inspired by titanic visions of planning, financing, designing, and erecting this icon of New York.”
–The New York Chronicle, Spring, 1996
“The Empire State Building is enduringly essential – like the building itself.”
–A jacket blurb by Mike Wallace, the Pulitzer Prize winning co-author of Gotham: A History of New York City to 1898
“This year’s assortment of architecture books is one of the finest in recent memory.... Starting at the top, almost literally, The Empire State Building: The Making of a Landmark, is a methodically researched, richly informative account of the raising of the world’s most famous skyscraper.”
–The Chicago Tribune, 1995
“Book-length examinations (of the Empire State Building) are relatively rare. The best is certainly John Tauranac’s comprehensive study, The Empire State Building: The Making of a Landmark..., which really obviated any other book on the building until the crucial shift in context created by the terrorist attacks of September 11, 2001.”
–From the Bibliographic Essay by Mark Kingwell, author, Nearest Thing to Heaven
“Kingwell (author of Nearest Thing to Heaven) does not seek to replace John Tauranac’s history of the building’s construction, The Empire State Building: The Making of a Landmark (Scribner, 1995). That excellent 375-page book focuses on the 1920s context, the building’s design, the nuts and bolts, the financing, and the practical side of running it and making a profit…. The architect or historian interested in how the building was built is best served by Tauranac.”
–From a review of Nearest Thing to Heaven by David E. Nye, Journal of the Society of Architectural Historians, June, 2008
“A building that is a movie star unto itself deserves a writer of such contagious enthusiasm as Tauranac.... A fascinating, self-propelling, and definitive history of the building.”
–Booklist, November 15, 1995
“Tauranac has written an informative and exciting biography of Manhattan’s most famous building.”
–Publishers Weekly, October 30, 1995