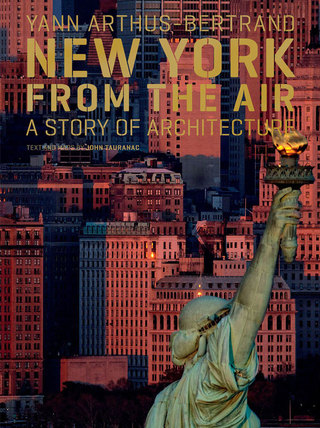 New York From the Air: A Story of Architecture

As the web site for the publisher Harry Abrams says, the third edition of New York From the Air is "completely updated with new photographs and text.... (The book) is a lush, romantic, and ultimately hopeful tribute to one of the most thrilling cities in history. World-renowned bestselling photographer Yann Arthus-Bertrand – shooting from vantage points few people ever attain – presents the power and beauty of Manhattan’s amazing skyscrapers, the bucolic joys of Central Park, the majesty of the Upper West Side’s castle-like apartment buildings, and much, much more. This new edition includes unpublished photographs of landmarks built since the 2003 edition. New York historian and cartographer John Tauranac’s lively commentaries lead readers on a truly spectacular tour from above the city."

The third edition is the biggest. It is 216 pages long, and what makes it so impressive is the page size, at 12 X 17 inches. As you can imagine, the spreads are panoramic. One reviewer said that “this book could be a coffee table in its own right.”

Said Sam Roberts, the Times reporter, “No one … has revealed New York from above as vividly as Yann Arthus-Bertrand, the Paris-based photographer who has made a career of providing a heavenly perspective on the planet Earth…. John Tauranac – the designer and architectural historian … provides the textual and graphic footing on which the photographs figuratively rest.” – “City Geometry, Seen From Above,” The New York Times, October 2, 2011

And Daily News reporter Gina Pace said that “New York from the Air hits new heights with fresh photos of an ever-evolving city…. One tightly framed shot of the Symphony House apartments on 56th Street between Broadway and Eighth Avenue, tripped up Tauranac. (When the building was finally identified), Tauranac was stunned, knowing Symphony House well – he’d even included it in Manhattan Block By Block (his street atlas). ‘I had just never seen it from that perspective,’ Tauranac said, ‘Yann just looks at the city from a totally different perspective.’” – “Above It All,” New York Daily News, October 7, 2011