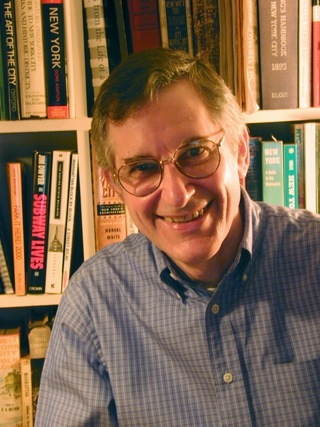 John Tauranac writes on New York City’s social- and architectural history, he teaches the subject, he lectures on the city and gives tours, and he designs maps.

Tauranac's newest book is Manhattan's Little Secrets: Uncovering Mysteries in Brick and Mortar, Glass and Stone, published by Globe Pequot, August, 2018. Tauranac leads us on a merry chase from the southern tip of Manhattan to the northern heights, dealing with subjects that guidebooks usually ignore and passersby ordinarily overlook.

Tauranac’s other books include The Empire State Building: The Making of a Landmark, which was first published by Scribner in 1995 and has now been reprinted by Cornell University Press, as well as the three editions of New York from the Air (Abrams), with photographs by the great aerial photographer, Yann Arthus-Bertrand.

He is also the author of Elegant New York: The Buildings and the Builders, 1885–1915 (Abbeville Press, 1985; reprinted, 1996); Essential New York: A Guide to the History and Architecture of Manhattan’s Important Buildings, Parks, and Bridges (Holt, Rinehart & Winston, 1979); The View From the 86th Floor: The Empire State Building and New York City (Tauranac Press, various editions, 1998–2010); Seeing New York: The Official MTA Travel Guide (Popular Library-CBS, 1976); and the guidebooks for MTA’s Culture Bus Loops I and II (Municipal Art Society, 1974 and 1975).

Tauranac’s first published maps were New York Magazine’s “Undercover Maps,” which were published in 1972 and 1973. Those maps showed how to stay dry in the wet and warm in the cold by navigating passageways through and under buildings in Midtown and Lower Manhattan.

Maintaining his mole’s eye perspective, Tauranac chaired the Metropolitan Transportation Authority’s subway map committee for the bulk of its existence in the mid- and late 1970s, and he was the creative director, or “guiding light,” of the official New York City Subway Map that was published in 1979. That map won its share of kudos – an editorial in The New York Times (“The Best Subway Map in Years”), a review by the Times architectural critic, Paul Goldberger (“At Last, A Usable Subway Map”), and a Commendation for Design Excellence awarded by the U.S. Department of Transportation and the National Endowment for the Arts. He oversaw the creation of dozens of other transportation maps for the MTA, and he has designed maps for Historic Battery Park, Avenue Magazine, the Parks Council, both the Grand Central and Lincoln Square Business Improvement Districts, the Aviation Division of the Port Authority of New York and New Jersey, both editions of Kenneth T. Jackson’s Encyclopedia of New York City (Yale University Press), and the most recent edition of New York From the Air (Abrams).

Maps that are published under the Tauranac imprint include John's newest take on mapping the New York City subway system, a map that is entitled, originally enough, "New York City Subway Map." (See "Tauranac's Line of Maps.") His innovations in mapping the subway system include having service right on the line in symbols indicating express- or local service, and station names that include the street of operation so that people can see in one place where the station is without having to look elsewhere, and service that is not simply described as "Full Time" or "Part Time," because "Part Time" can be any number of times. By color coding the service you can see full-time service, and service that only operates weekdays or weekends, or rush hours, and so on.

Manhattan Block By Block: A Street Atlas, was first published in 2000 and is now in its sixth edition. Its 172 pages, ninety of which are the "Block By Block" maps, include tourist attractions, hotels, neighborhoods, parks and playgrounds, performing arts centers, theaters and movie houses, major office buildings and apartment houses, schools, colleges and universities, libraries, hospitals and emergency rooms, houses of worship, public statuary, and all with public transportation – the subways and buses and railroads – an integral part of the maps.

"Manhattan: 3 Maps in 1" includes a subway map and a bus map facing each other to show the ease of intermodality, plus a places-of-interest map. They are all to the same scale and all with the same grid coordinates for easy cross referencing. Tauranac also publishes a little Manhattan subway- and bus map that folds down to fit in a credit-card case. Despite this map's petite size, it is remarkably clear and legible, and clarity is king.

Tauranac has been teaching New York’s architectural history for over 30 years at NYU's School of Professional Studies, where he is an adjunct associate professor. In 2006, the school presented him with its Award for Teaching Excellence.

Tauranac was named a Centennial Historian of the City of New York by the Mayor's Office for his work in history in 1999.

Tauranac is a graduate of Columbia’s School of General Studies, where he majored in English literature and minored in history. He did his graduate work in American urban history at NYU’s Graduate School of Arts & Sciences.

John lives on Manhattan's Upper West Side with his wife, Jane Bevans, an artist and lawyer. They are both native New Yorkers. Their daughter and son-in-law, Maggie Tauranac and Evan Bardot, live nearby with their daughter, Poppy.